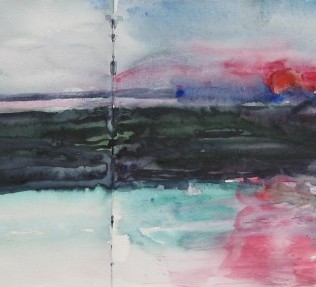 “These coastal landscapes are painted on location and directly from observation at a particular stretch on the Llansteffan coastal peninsular as it faces out to sea looking east over Cefn Sidan and across to the Gower, south over Pendine to Lundy and Caldy Island, and west towards Laugharne.

I follow the sun in its progress across the sky and paint as it descends, into the sea in the winter months and beyond the land as the year progresses. In December on the shortest day the sun sets over Lundy, and then progresses upwards and westward as the days lengthen. From midsummers day it begins its predictable journey back across the sky.

The movement of the sun comes as a surprise to many people who naturally take it for granted that it is usually above our heads even if invisible behind clouds, they understand that it moves during the day, but its annual migration by daily increment is much greater and more dramatic than is generally appreciated.

I paint on paper with one large sable hairbrush and watercolour, there is no preliminary drawing, what happens is an intuitive response to what is before me.

Sitting quietly in the same place I see many birds and animals, the peregrine falcon holds a particular allure for me and I often see and hear military activity, the manoeuvres of planes and helicopters bombing and shelling the target area at Cefn Sidan. Witnessing this I sense the beauty of nature, land and sea compromised by these violent, aggressive intrusions, momentarily the Earth loses its virtue to man’s madness but nature and the sun redeem and these watercolours of the sunset are my way of holding on to the beauty of the Earth and to the wonder of life itself.”